Bilingualism is wide spread natural phenomenon (Valdes-Fallis, 1978:3) that happens when an individual or a speech community uses two languages. If the people are fluent in two languages, they said to be ‘bilingual’. Grosjean in Romaine (1989:8) estimates that about half of the world’s population is bilingual and that bilingualism is present in practically every country of the world that has implications for a wide range of activities. 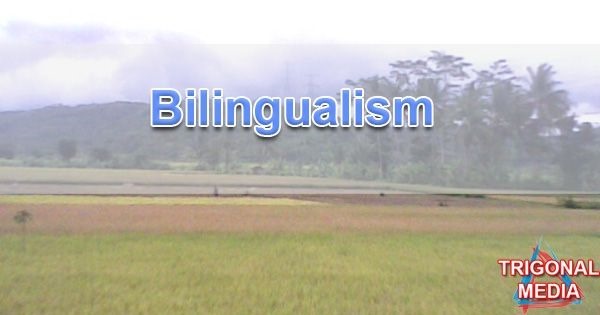 Mackey (1968:23) suggests that there are four inherent characteristics that bilingualism may be described. They are degree, function, alternation and interference. The term of degree of bilingualism concerns proficiency, it is used to determine how well the bilingual knows each of the languages. Function focuses on the uses to which bilingual puts the language and the condition under which he/she has used it.  This may be happened internal or external. The external functions of bilingualism are determined by the number of the areas of contact and by the variation of each in duration, frequency and pressure. On the other hand, internal functions include non-communicative uses, like internal speech, and the expression of intrinsic aptitudes, which influence bilingual’s proficiency to resist or profit by the situations with which he/she comes in contact. Alternation treats the extent to which the individual alternates between the languages. The characteristics of degree, function and alternation determine the interference of one language with another in the speech of bilinguals. It has to do with the extent to which individuals manage to keep the languages separate, or whether they are fused.

In coordinate bilingualism, there are parallel sets of word concept pairs and the second language is connected to a new conceptual structure. In other words, the person learns the languages in separate environments, and the words of the two languages are kept separate with each word having its own specific meaning. For example the French term livre would have its own meaning and the English word ‘book’ its own meaning. It could be happened because the two languages were associated with different contexts.

On the other hand, in compound bilingualism the people learn the two languages in the same context, where they used concurrently. In this case, the people maintain their first language, adding to the second language to their linguistic repertoire. For example, the people, who use both German and French in the home would know both German Buch – ‘book’ and French livre, but would have one common meaning for them both.

Sub-coordinative bilingualism is the case where the second language develops so that it is entirely parasitic on the first language. In other words, there is weaker and stronger language. Thus, the dominant language is the stronger that acts as the filter for the weaker one. For example, if English is the weaker language of a French/English bilingual, the English word ‘book’ will evoke the French word livre.

Nowadays, there are many schools in the world, included in Indonesia that has adopted bilingual education program.  Bilingual education program has slept across in language and non-language teaching in our country, English as an international language is used as the alternative instruction in bilingual class not only in English lesson but also in others lessons, especially in mathematics and sciences. Therefore, English and non-English teacher should be able to master in English.

In bilingual education program, bilingualism is seen as a transitional device that biliterate bilingualism and language maintenance are fundamental goals. (Valdes-Fallis, 1978:17)

Here are characteristics of good bilingual education program based on Zelasko (www.stateuniversity.com):