Recount text is a reconstruction of something that happened in the past. It is the unfolding sequence of events over time and the purpose is to tell what happened. Recounts begin with by telling the reader who was involved, what happened where this event took place and when it happened. The sequence of event is then described in some sort of order, for instance a time order (Seaton, 2007). 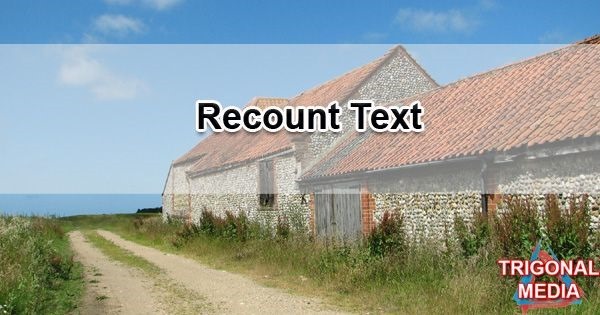 The generic structure of a recount consists of three parts; they are the setting or orientation, events, and conclusion. The setting or orientation is the background information answering who, when, where and why. It is also where you give an outline of what you are writing about. Events are where you write about the things that happened and are identified and described in chronological order. And the conclusion expresses a personal opinion regarding the events described. In other words this is where you bring your writing to a close by saying how things went, saying what you felt about the things that happened and/or mentioning something which will or may happen later.

A recount has a title, which summarizes the text. Since recount tells about past experiences, it uses past tenses; such as simple past, past perfect, past continuous, past perfect continuous tenses.

A recount describes events, so plenty of use is made of verbs (action words), and of adverbs (describe or add more detail to verbs). And since it describes events in a chronological order, to describe the events words which link events in time can be used, such as next, later, when, then, after, before, first. The lexicogrammatical features of recount are focus on specific participants, use of past tense, use of material processes, circumstances of time and place, and focus on temporal sequence. According to the 2004 Competence Based Curriculum, recount is being taught in the tenth year. The basic competence is the students can use various kinds of language, i.e.: either written or verbal in smooth and accurate transactional and monologue texts especially on the form of recount, narrative, procedure, report and news item.