English at elementary school is placed in “Muatan Lokal”. Nevertheless, it is important to introduce English starting from elementary school because it will help students in their next level. They will not face the most difficulty because at least they have introduced the basic element of English. So, in their higher level, next they will get the effective result in learning English. 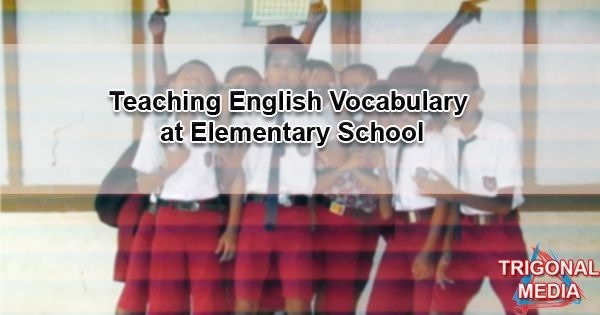 Teaching vocabulary is a process in which teacher gives some new words to the students and hoping that they can recognize, pronounce, practice and remember those new words may they haven’t heard those words before (Surachmat, 2008:21).

Picture is indispensable media for language teaching since they can be used in so many ways. They can be wall picture, blackboard drawing, charts, flashcards, table or statistic and etc.

Synonym is two or more words which have the same meaning but different in spelling and writing. Comparing synonyms help to the students see the relationship between words of similar meaning. Students can learn to distinguish of words by nothing words that belong to certain classes or groups, such as the word big similar with the word great and huge.

A studying antonyms can be part of a word analysis. Antonyms also studied as adjectives, early-late, smooth-rough, thin-fat.

Homonyms are words identical in pronunciation but different in meanings. Teachers can use written exercise to give the students an opportunity to discriminate between the spelling and meaning of homonyms.

When the teacher find difficulties in explaining words, for example the teacher want to teach the word ‘animal’, the teacher can enumerate a number of animal like lion, tiger, horse, cow, cat, etc.

The teachers give explanation or definition of the word given. For example, the word “pencil”, the teacher explains it is used to write something on the paper.

The teacher sometime has to translate it into students’ mother tongue.

Game provides an excellent opportunity for he use of grammar, structures, and vocabulary. At the beginning learning levels, we may ask students to take prearranged objects out of the box and practice such expressions as what’s in the box. Play acting can also be very effective. Students acting out roles may speak in the present tense, as I’m John and I’m working in an office (A toy, papers, and other office product will be helful).

Derivation involves all kinds of English word changes, such as verb, noun, adverb, adjective, etc. the changes are in parts of speech or in inflation. (word by prefix and suffix).

It means an act of showing something as an explaining the meaning of the words.

Song can also be a technique to get the meaning of words, in this case the young learners usually like singing very much.